The use of containers for high-performance computing and other purposes has seen increasing popularity in recent years. A variety of container technologies are now available, and researchers continue to investigate best practices for creating, distributing, and using containerized applications. 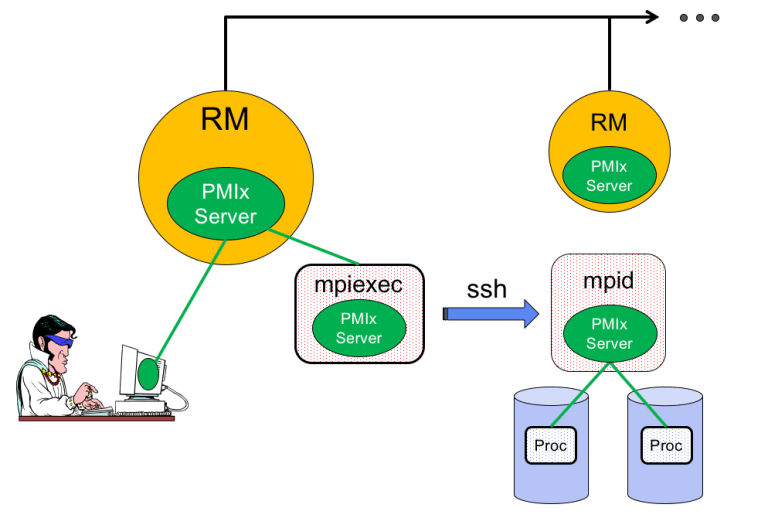 One point of concern lies in the cross-boundary integration of the containerized application to the hosting system management stack (SMS). While a containerized application generally includes all of its dependent libraries, there are operations that need to cross the container’s boundary and interact with services outside the container. For example, containers launched by a system-supplied starter such as MPI’s mpiexec may need to exchange wireup information using daemons running outside the container, as shown at right, or request additional resources via the system-level PMIx server.

Use-cases such as these require compatibility between the SMS-to-application communication libraries inside and outside the container. Managing this requirement by matching library versions is very difficult as it would require that containers continually update their internal libraries – which somewhat defeats the point.

As PMIx has grown to support a wider range of application-SMS interactions, it has become a natural place to define an alternative solution to the cross-boundary compatibility problem. PMIx has addressed this by utilizing a plugin-based architecture that allows both the client and server to select from a range of supported protocol levels. The resulting coordination is based on a client-driven handshake – i.e., the client selects the protocol to be used, and the server adapts to support it. The client’s selection is based on a combination of environmental parameters passed to it at launch by the server, filtered against the protocols available to that particular client. For example, a PMIx v1.2 client only has the “usock” messaging transport available to it, and so would select that transport even when a PMIx v3 server offered “usock” and “tcp” options. Note that if the PMIx v3 server had not been instructed to support “usock”, then the v1.2 client would have failed PMIx_Init with an error indicating the server was unreachable.

Although the PMIx community is committed to supporting the cross-version use-case, early releases did not fully provide the necessary capabilities. Each release branch has since been updated to include the required translation logic for communicating to other versions, but full compatibility could not be provided due to the level of changes it would introduce to what would otherwise be considered a “stable’ release series. Thus, the following chart shows the available compatibility: 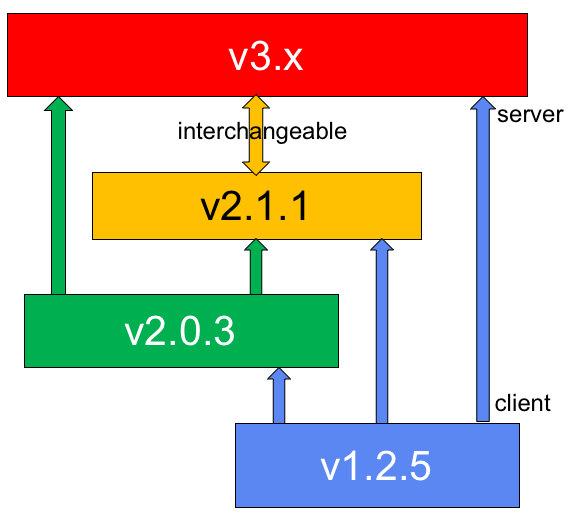 Starting with v2.1.1, all versions are fully cross-compatible – i.e., the client and server versions can be any combination of release level. Thus, a v2.1.1 client can connect to a v3.0.0 server, and vice versa.